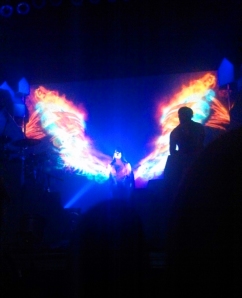 Beats Antique just kicked off it’s spring tour of A Thousand Faces, Act II. Included on the tour are new destinations, including my hometown Spokane, Washington.
I have been a huge fan of Beats Antique since their first album was launched. While I perform classical bellyance far more often than tribal fusion as a soloist, my fusion performances are almost exclusively backed by Beats Antique tracks, despite my efforts to branch out. Many of the mellow, less dance-able tracks back my day to day listening selections. Despite my fandom, until last night, I have never had the opportunity to see them live.

When the show began and David Satori and Sidecar Tommy entered the stage, the excitement was palpable. The roar of the crowd was deafening, so much so I could not even hear my own screeching. The show began with a pulsating rhythm, accompanied by dazzling projections, and warm, driving stage presence from David and Tommy. Zoe made a grand entrance halfway through the first song with an exciting Odissi influenced piece with dramatic balances and detailed facial expressions.

The group as a whole has created a versatile, multi-faceted concert experience. The music pulls on luscious influences both modern and ancient, from cultures across the world. The musicians are incredibly talented, with David pulling out many instruments from horns to violin. Tommy is vastly talented on the drums, beating out an incredible variety of rhythms. One of my favorite numbers was a dramatic call and response duel between Tommy and David. The projections featured fun video game and comic book inspired battles.
Zoe had a vast repertoire, featuring temple dance, tribal bellydance, burlesque, modern dance and general frolic. Some acts featured Zoe and David acting out mini plays with paper mache animal heads. In perhaps my favorite moment from Satori, he dons a mask and assumes the role of protagonist to the dainty folkloric character portrayed by Zoe, who she playfully fends off.
Some of her characters she brings to life on stage were uplifting, some tragic, some powerful. I do not want to give away the surprises of the concert, but the use of props, staging, lighting and characterization was mind-blowing.

For viewers who have long kept up with the show 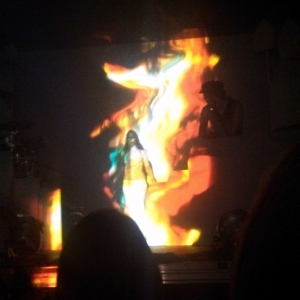 and Zoe, understand this show gives an unexpected look at Zoe’s repertoire. In the past, she has mostly focused on tribal fusion and bellydance influence. Zoe as an artist has been inspired by other influences and is exploring them. Some lamented that she did not perform more tribal dance, in fact the show has hardly any Middle Eastern derived influence at this point. Instead the show draws more on Indian dance, circus influence, modern and theatrical styles. I say, always enter a show or any creative work with an open mind. That is the point of art, after all.

The negatives are minor points, and vastly isolated I believe. One of the featured opening acts was not present – whether due to mechanical failure, flight delay, illness, we don’t know. This unfortunately left the show delayed by one hour with no entertainment, after the doors opened a half hour late. I understand how shows run, you never know what to expect. I am sure that such an occurrence won’t happen again. Such is the downfall of any live entertainment, though! In the end, no one seemed to mind, everyone drank and danced until the show began.

The bottom line is that this concert appeals to an incredibly wide variety of patrons. At our relatively small-town show we spotted everyone from ravers, hippies, steampunkers, rennies, bellydancers, concert junkies, and so many more. The show also drew a wide variety of ages, from under 18 to over 55. The show is truly a multi-sensory experience, and sure to provide something for everyone.

No time to practice? Got 5 Minutes?

I find myself frequently talking with my students about practice. It is so important, and the students who do practice improve so much more quickly than those who do not. Yet, we all know that feeling when life gets in the way. We have the best intentions and even set aside time to practice, but […]

If you dance to Middle Eastern music, or work for Middle Eastern clubs or clients, it’s important to know at least a sampling of Arabic vocabulary. Here are a couple of starter words that are commonly heard in music to help you identify the type of song, even if you don’t understand every word. Is […]

How to Take Amazing Bellydance Photos